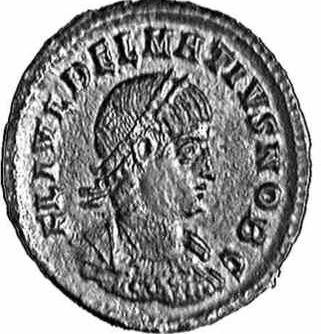 Dalmatius, whose full name was Flavius Dalmatius or Delmatius, was the son of Dalmatius the Censor, the brother of Flavius Hannibalianus, and the nephew of Constantine I . He and his brother Hannibalianus were educated at Tolosa (Toulouse) by the rhetor Exsuperius. On 19 September 335, he was raised to the purple with the rank of Caesar by his uncle the Emperor Constantine I ; his realm included Thrace, Achaea, and Macedon. In the late summer of 337, Dalmatius was murdered by the soldiery, perhaps as part of the purge of the imperial family that followed the death of Constantine I in May 337.