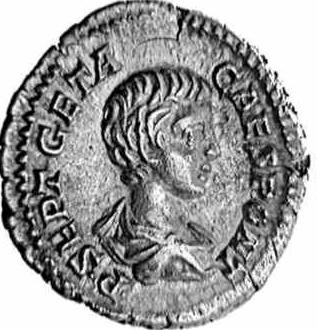 Publius Septimius Geta was the younger son of the emperor Septimius Severus. Geta's rivalry with his older brother, Caracalla, culminated in Geta's murder less than a year after Severus' death. Tradition soon idealized this victim of fratricide as a gentle prince taken by treachery far too soon.

Geta was born 7 March 189 in Rome, where his family was resident in between provincial governorships held by Severus under the emperor Commodus. The boy was named after Severus' father and was only 11 months younger than his brother, Caracalla.

In the course of the civil wars that established Severus as emperor, Severus used the young Caracalla to solidify popular support by changing the older son's name to connect the boy to the Antonine dynasty and by giving Caracalla the titles first of Caesar, then Augustus. As Caracalla was increasingly being treated as the "heir," Geta was being treated as the "spare." Geta was given the title Caesar and publicly promoted as part of a close-knit, imperial family.

The propaganda, however, was unable to hide completely the family's dysfunctional relationships, especially the increasingly bitter rivalry developing between the now teenagers, Caracalla and Geta. Severus decided to take his family out of Rome and on campaign in Britain to keep his sons busy. While Caracalla commanded troops, Geta was given civilian authority on the island. Geta was also given the title Augustus (more than a decade after his brother received it), which meant that Geta theoretically was co-emperor along with Severus and Caracalla. Geta's increased authority did nothing to improve his relationship with Caracalla.

Soon Severus' health began to deteriorate, and ever more desperate pleas were made for his sons to get along. Severus died 4 February 211 in York. Caracalla was 22 years old, Geta 21.

The Roman world now had two brothers as joint emperors, a situation that recalled events of half a century earlier, when adopted brothers Marcus Aurelius and Lucius Verus officially shared the empire. Caracalla might well have been satisfied had Geta behaved like Verus, whose authority was more official than real and who deferred to his older sibling in political matters. Geta, however, saw his authority as being truly equal with that of his brother, and the two were barely on speaking terms during the long trip back to Rome. Once in the city, the situation did not improve. Government ground to a halt as the two bickered on appointments and policy decisions. A later story even claimed the brothers were considering dividing the empire into two.

By the end of the year Caracalla was being advised to have Geta murdered, and after at least one unsuccessful attempt at the start of the Saturnalia festival, Geta was killed in late December 211. One version of events claimed Geta was lured to come without his bodyguards to a meeting with Caracalla and their mother, Julia Domna, to discuss a possible reconciliation. When Geta arrived, he was attacked by centurions. Wounded and bleeding, Geta ran to his mother and clinging to her, died.

Caracalla said the murder came in response to his brother's plottings, and the death started a bloody and violent purge of Caracalla's suspected enemies. Geta's memory was condemned, his name removed from inscriptions, his face removed from sculptures and paintings. Critics of Caracalla looked back wistfully at the murdered prince, who came to be described as a lamb devoured by his ferocious, lion-like brother. Official restoration of Geta's reputation came with the arrival of the emperor Elagabalus to Rome in 219, when Geta's remains were translated into the Mausoleum of Hadrian to join those of his father and brother.

The little reliable evidence about Geta's personality does not seem to support the idealized picture of a gentle prince, but the shocking nature of his death at the instigation of his brother transformed Geta's life into legend.

Michael Meckler, Caracalla and his late-antique biographer: a historical commentary on the Vita Caracalli in the Historia Augusta (diss. Univ. of Michigan, 1994)