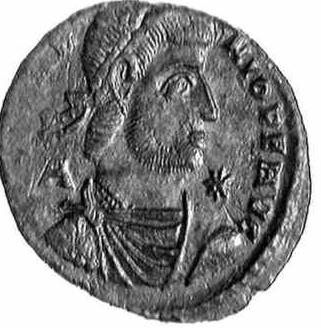 Vetranio was born of humble origin in Moesia and had served well under Constantine I; under Constans he became a magister militum. Fearing the revolt of Magnentius, Constantia, the sister of Constantius, persuaded Vetranio to assume the title of Caesar. He was in Illyricum when he received the newa about the revolt of Magnentius and the death of Constans. Constantia sent her brother a letter briefly informing him about the turn of events; he received the letter at Edessa, where he was facing the Persian menace. He sent Vetranio a diadem and recognized him as a fellow ruler. In order to keep Magnentius occupied, the emperor also sent Vetranio money and placed him in charge of the imperial troops stationed on the Danube.[[1]] In June 350, there was the abortive revolt of Nepotian.

Vetranio frequently asked Constantius for money and military aid to fight Magnentius; he also sent letters to the emperor professing his loyalty to him. When negotiations deadlocked, Magnentius and Vetranio made an alliance; they sent an embassy to the emperor. The ambassadors met with the emperor in Heracleia in Thrace. Magnentius offered to marry his daughter to Constantius and to marry Constantia, the emperor's sister, in turn. They first asked the emperor to lay down his arms and to accept the first honor as emperor. Constantius rejected their offer.[[2]]

Constantius first met with Vetranio at Serdica, and both moved on to Naissus in Serbia. On 25 December 350 both men mounted a platform before the assembled troops; Constantius managed, by means of a strong speech, to have the soldiers acclaim him emperor. He then took the purple away from Vetranio. The emperor led the old man down the stairs of the platform, called him father, and led him to the dinner table. Vetranio was allowed by Constantius to live as a private citizen at Prusa on the equivalent of a state pension for six years until his death.[[3]]

Barnes, T.D, Athanasius and Constantius: Theology and Politics in the Constantinian Empire, Cambridge, 1993.