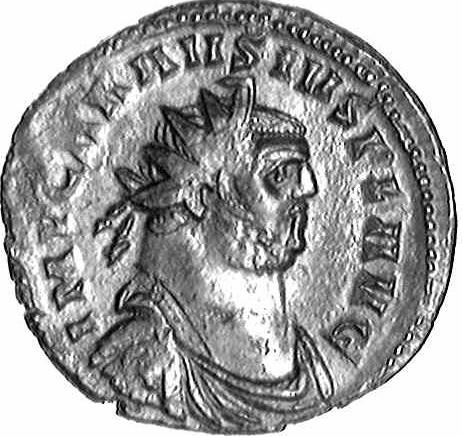 Carausius, whose full name is attested as Marcus Aurelius Maus. Carausius, was of the Menapii who were from Belgica. Although he had initially earned his living at sea as a helmsman, he served with honor in the military against the Bagauda e under the Emperor Maximianus Herculius. Because of his naval background, he was commissioned by the emperor to build a fleet and clear the seas of Saxon and Frankish pirates in the autumn of 286; he operated from out of Boulogne (Bononia). Although he carried out his commission with speed, for one reason or another he did not turn over to imperial treasury all of the loot that he obtained. Due to these financial irregularities, Herculius ordered his arrest and execution. Rather than submitting to the emperor's will, Carausius fled to Britain with his fleet and declared himself emperor. His realm included Britain and perhaps the area around Bononia (Boulogne).

Because he spent much of 287 waging war against the Germans, Maximianus Herculius did not begin preparations to repress Carausius until apparently the spring of the next year. He began to build a fleet which he would be able to use against the rebel. While he and his colleague Diocletian invaded Germany, Herculius' praefectus praetorio Constantius Chlorus campaigned against the Franks, who had allied themselves with Carausius, and succeeded in forcing them to submit to the emperor. The emperor's fleet was ready in 289; it was destroyed by a storm, however, before it could be used against the usurper. Although Herculius attempted to push Carausius out of northern Gaul in 290, his attempt came to naught. The tide turned in 293 when Constantius Chlorus was appointed Herculius' Caesar. His assigned task was to break the back of Carausius' rebellion. He did this by besieging the city of Bononia and by closing its harbor. Although the city surrendered, the victory must have left a bitter taste in the Caesar's mouth because Carausius was murdered by his rationalis Allectus, who claimed the throne for himself. The latter was able to escape to Britain and Constantius, lacking a fleet of ships, was unable to follow him.

A Case Study For Publishing With Xm