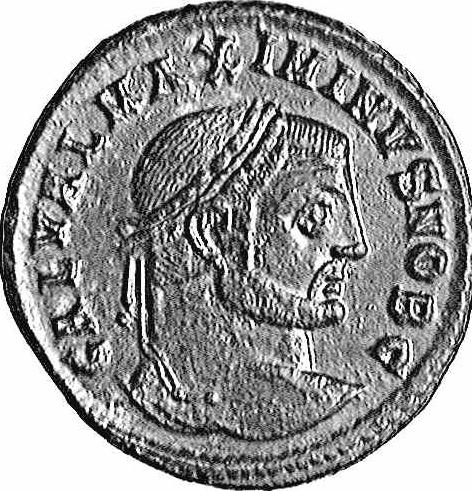 Caius Valerius Galerius Maximinus, more commonly known as Maximinus Daia or Daza, was from Illyricum and was of peasant origin. He was born 20 November perhaps in the year 270. Daia was the son of Galerius' sister and had served in the army as a scutarius, Protector, and tribunus. He had been adopted by Galerius ; his name had been Daia even before that time. He had a wife and daughter, whose names are unknown, while his son's name was Maximus. When Diocletian and Maximianus Herculius resigned their posts of emperor on 1 May 305, they were succeeded by Constantius I Chlorus and Galerius as Augusti; their new Caesars were Severus and Maximinus Daia respectively. Constantius and Severus ruled in the West, whereas Galerius and Daia served in the East. Specifically, Daia's realm included the Middle East and the southern part of Asia Minor.[[1]]

Immediately after his appointment to the rank of Caesar, he went east and spent his first several years at Caesarea in Palestine. Events of the last quarter of 306 had a profound effect on the Emperor Galerius and his Caesar Daia. When Constantius I Chlorus died in July 306, the eastern emperor was forced by the course of events to accept Constantius' son Constantine as Caesar in the West; on 28 October of the same year, Maxentius , with the apparent backing of his father Maximianus Herculius, was acclaimed princeps. Both the attempt to dislodge Maxentius by Severus, who had been appointed Augustus of the West by Galerius after the death of Constantius in late 306 or early 307, and the subsequent campaign of Galerius himself in the summer of 307 failed. Because of the escalating nature of this chain of events, a Conference was called at Carnuntum in October and November 308; Licinius was appointed Augustus in Severus's place and Daia and Constantine were denoted filii Augustorum. Daia, however, unsatisfied with this sop tossed to him by Galerius, started calling himself Augustus in the spring of 310 when he seems to have campaigned against the Persians.[[2]] Although, as Caesar, he proved to be a trusted servant of Galerius until the latter died in 311, he subsequently seized the late emperor's domains. During the early summer of that year, he met with Licinius at the Bosporus; they concluded a treaty and divided Galerius' realm between them. Several yea rs later, after the death of Daia, Licinius obtained control of his domain. Like his mentor the late emperor, Daia had engaged in persecution of the Christians in his realm.[[3]]

In the autumn of 312, while Constantine was engaged against Maxentius, Daia appears to have been campaigning against the Armenians. In any case, he was back in Syria by February 313 when he seems to have learned about the marital alliance which had been forged by Constantine and Licinius. Disturbed by this course of events and the death of Maxentius, who had been his ally, Daia left Syria and reached Bythinia, although the harsh weather had seriously weakened his army. In April 313, he crossed the Bosporus and went to Byzantium, garrisoned by Licinius' troops; when the city refused to surrender, he took it after an eleven day siege. He moved to Heraclea, which he captured after a short siege; he then moved his forces to the first posting station. With only a small contingent of men, Licinius arrived at Adrianople while Daia was besieging Heraclea. On 30 April 313 the two armies clashed on the Campus Ergenus; in the ensuing battle Daia's forces were routed. Divesting himself of the purple and dressing like a slave, Daia fled to Nicomdeia. Subsequently, Daia attempted to stop the advance of Licinius at the Cilician Gates by establishing fortifications there; Licinius' army succeeded in breaking through, and Daia fled to Tarsus where he was hard pressed on land and sea. Daia died, probably in July or August 313, and was buried near Tarsus. Subsequently, the victorious emperor put Daia's wife and children to death. [[4]]

Dirstemmata Of The Justinian Emperors