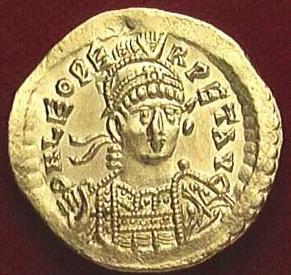 Leo was born in the Balkans, ca. 401, with different sources suggesting Thracia or Dacia. He married Verina before becoming emperor and they had three children. Ariadne was born before Leo became emperor; a second daughter Leontia was born in 457, and an anonymous son died at age five months in 463. Ariadne married Leo's eventual successor, Zeno while Leontia married the son of Anthemius, Marcian (named after Anthemius' father-in-law, the emperor Marcian). Leo's early career was military, and he had reached the rank of tribune in the regiment of the Mattiarii by 457. With the death of the emperor Marcian in 457, Leo was acclaimed emperor, probably with the support of the magister militum Aspar. This involved passing over Marcian's son-in-law, Anthemius. Leo's coronation on February 7, 457 is the first known involving the patriarch of Constantinople as well as the army and Senate. Leo died of dysentery aged 73, on 18 January, 474. He was succeeded by his son, Leo II

The peace treaty Theodosius II had made with the Sassanid Persians continued, leaving three major areas of concern in foreign policy, the Balkans, the Vandals and the Western Empire. With the disintegration of Attila's Empire, two Gothic groups, under Theoderic Strabo and Valamir, moved into the Balkans. Hostilities by Valamir in the western Balkans in 459 led to a negotiated peace with the Romans giving a small subsidy in exchange for peace and a hostage. At the same time, new barbarian groups, the Avars, Slavs and Bulgars, began filtering into the Transdanubian region. This in turn put increased pressure on Roman forces holding the Danube. Roman campaigning under Leo continued against the groups within and beyond the empire, especially against those Huns were under the leadership of Dengizech until his death in 469. The Goths led by Theoderic Strabo, who was appointed magister militum praesentalis in 473, were able to reach a dominant position in the eastern Balkans. His success threatened Valamir's Goths, now led by Valamir's son Theoderic, who moved east to challenge Strabo shortly before Leo died. Outside the Balkans, the Vandals were also a serious problem and in 468 a major Roman offensive was launched against them. This involved a naval expedition, supported by troops marching overland from Egypt and by western Roman troops under Marcellinus. The expedition was led by Leo's brother-in-law, Basiliscus, but turned out to be a disaster. As well as having little military effect, the expedition was tremendously expensive. Lastly, Leo had great influence in the west and was able to approve Ricimer's appointment of Majorian as western Emperor in 457. A decade later, 467 Leo sent Anthemius, who had married the daughter of the previous emperor, Marcian, as Emperor for the west. In 474, after the death of Olybrius, Leo sent an expedition to Italy under Julius Nepos to expel Olybrius' successor, Glycerius. There were also minor military problems in the Caucasus and Arabian regions.

After Leo's acclamation, the early domestic events concerned religion. In 460, the Alexandrians elected a monophysite patriarch, Timothy Aelurus ("the Cat"). After consulting bishops throughout the east, Leo removed Timothy by force, replacing him with Timothy Salofaciolus (the Greek means either "White-Hat" or "Wobble-Hat"). Constantinople was devastated by a major fire in 464. During the early part of Leo's reign, the magister militum Aspar was a prominent figure and probably instrumental in Leo's accession. This position was weakened when Aspar's son, Ardabur, was found guilty of treachery in 466 and dismissed from office. Leo then married his eldest daughter, Ariadne, to Zeno, probably in 466, Aspar, however, continued to be influential. In 467, the pagan Isocasius, a court official, was arrested and accused of being a Hellene (i.e. pagan). Although he was acquitted of the charges, this probably led to Leo's issuing a law in 468 which banned pagans from being lawyers. At this period probably occurred the creation of a new guard regiment, the excubitores, which in its early stages at least, was dominated by Isaurians. Although Aspar's dominance and been weakened, he was able to reassert himself after the failure of the Vandal expedition of 468 and prevailed upon Leo to declare his son, Patricius, as Caesar in 470. When the magister militum Anagastes revolted in Thrace in 470 negotiations with Leo revealed that the rebellion was encouraged by Ardabur. Leo eventually decided that Ardabur was too dangerous to let live. Aspar and Ardabur and probably Patricius were murdered in the palace in 471, from which Leo acquired the nickname "M

", meaning "the Butcher". Following the murders, there was a persecution of the Arians who had supported Aspar. For the rest of the reign, Zeno, as Leo's son-in-law, was the dominant figure.

For references to primary sources, see entries in RE or the PRLE. Translations of much of the source material can be found here in Ralph Mathisen's DIR essays on the "Shadow Emperors", or in C.D. Gordon ( The Age of Attila: Fifth-Century Byzantium and the Barbarians [Ann Arbor, 1960]) and R.C. Blockley (Fragmentary Classicizing Historians of the Later Roman Empire [Liverpool, 1983], vol. 2.).

Copyright (C), Hugh Elton. This file may be copied on the condition that the entire contents, including the header and this copyright notice, remain intact.