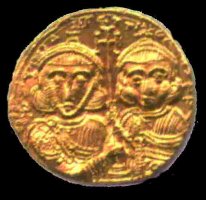 With the death of Constantine IV at the early age of thirty-five in September 685, his seventeen-year-old son, Justinian II assumed sole power. The first years of his reign were successful ones for the empire. The Caliph cAbd al-Malik, concerned with the possibility of new Byzantine attacks and an unsteady internal situation, renewed his treaty with the Byzantines, originally signed during the reign of Constantine IV, with more favorable terms for the Byzantine Empire. The Caliph not only increased the amount of yearly tribute paid to the Byzantines, but also agreed to share the income from Armenia, Iberia, and Cyprus. Justinian, in return, resettled the Mardaites, who had been raiding the countryside in Syria and Lebanon, in western Asia Minor and the Peloponnese. In 688, the Byzantine general Leontius, led an expedition into Armenia and Iberia in a successful attempt to quell local unrest and bring peace to the region. Also that year, Justinian conducted a successful expedition against the Slavs in the eastern regions of the empire, many of whom were captured and transferred to Cappadocia and Bithynia. In 690, he resettled a number of Cypriots in areas around Cyzicus. Justinian decided to renew attacks on the Arabs in 692, but the recently subjugated Slavs, who had been drafted into his army, deserted, allowing the Arabs to defeat the Byzantines and regain full control over Armenia.

Justinian's religious policy was similar to that of his father, Constantine IV, who had attempted to bring about a reconciliation between Rome and Constantinople. He was the first emperor to place the image of Christ on his coinage, along with the motto servus Christi. In 686, he convened a synod that upheld the denial of monotheletism. Unlike his father however, Justinian, was not willing to compromise with Rome concerning the supremacy of the see of Constantinople over the see of Rome. In 692, he called for an ecumenical council to be held in the domed hall of the imperial palace. The In Trullo council was also known as the Quinisext (Greek - penthekte) council since it dealt with matters discussed at the fifth ecumenical council of 553 (Constantinople II) and the sixth ecumenical council of 680 (Constantinople III). While the council addressed a wide range of subjects, such as discipline, marriage of priests, and the organization of church administration, the most significant judgement of the council was canon 36 which emphasized the equality of the Roman and Constantinopolitan sees. The papacy, upholding the position of the Roman see's supremacy, rejected all the canons of the Quinisext Council. Justinian, attempted to enforce the decision of the council by ordering the arrest of Pope Martin, but this was prevented by the populace and troops of Rome.

The End of His First Reign

Justinian's reign was not popular either in Constantinople or in the provinces. Heavy taxation enforced by the eunuch Stephen the Persian and the general logothete Theodotus, combined with Justinian's disregard for the senate, sparked a successful coup in the city led by the Blue circus faction who proclaimed the general of the thema of Hellas, Leontius, as emperor in 695. Leontius commanded that Justinian's nose and tongue be slit and then exiled him to the city of Cherson, while Stephen and Theodotus were executed. Justinian's mutilation led to his nickname

, cut or slit nose, and he supposedly wore a gold nose over the disfigurement to hide it.

His Return to Power

During his exile in Cherson, the city authorities became concerned over rumors that Justinian was plotting to regain his throne and decided to seize him and send him to Constantinople for the emperor Tiberius to handle. Receiving word of the city officials' intentions, Justinian fled to the Khazars and was greeted by their khan with great hospitality. In 703, Justinian even married the khan's daughter, who took the name Theodora. Tiberius, finally learning of Justinian's intrigues, sent envoys to the Khazars to demand that the Khazars turn over Justinian. The khan, not wishing to disrupt the tenuous alliance between the Byzantines and the Khazars, agreed to hand over Justinian to the envoys, but Justinian, learning of the khan's decision fled again, this time to the Bulgars. The khan of the Bulgars, Tervel, agreed to support him. In 705, Justinian arrived outside the walls of Constantinople accompanied by a large Bulgar and Slav army. Since the defenses of Constantinople were too formidable for a frontal assault, Justinian, accompanied by a few supporters, entered the city through one of the aqueducts. Once inside the city, Justinian was able, with the help of others in the city who favored his return, to seize control and overthrow Tiberius. Once he had reassumed power, Justinian had Tiberius and Leontius publicly executed. He also had his wife Theodora, who became the first foreign Byzantine empress, and their son Tiberius brought to the city to join him.

The Arabs, taking advantage of the unsettled Byzantine civil situation, sent expeditions into Asia Minor to test Byzantine defenses and willingness to respond. Justinian ignored the new incursions of the Arabs and focused his attention instead on punishing his enemies. Justinian met with Pope Constantine I who visited him in Constantinople in 711 and agreed to a compromise over the differences between the sees of Constantinople and Rome. Learning of a revolt against the Pope in Ravenna, Justinian dispatched military forces to the city to quell the uprising.

The End of His Second Reign

In 711, Justinian sent an expedition against the city of Cherson to halt the Khazars' advance. It also allowed him the chance to punish the city of his exile and any personal enemies residing there. After the expedition subdued the city, installed Elias as governor, and departed, Cherson with the support of the Khazars, revolted. The expedition was ordered to return and retake the city, but was unable to do so as the city was now well defended under the guidance of Bardanes. The besieging fleet and army soon joined the city's revolt and Bardanes was proclaimed as emperor and assumed the imperial name Philippicus. The fleet sailed to Constantinople to depose Justinian who fled to Asia Minor to raise support in the Armeniakon and Opsikion districts. He was unable to gain any support and was killed by Elias, who had his head removed and sent to Rome and Ravenna for display.

Acta of the Quinisextum Council.

Treadgold, Warren. A History of Byzantine State and Society. Stanford, 1997.

The Stemmata Of The Ducas Dynasty