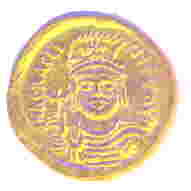 The last years of Phocas' reign were troubled ones with many foreign threats, such as the Slavic incursions, and internal threats, such as violent religious conflicts and even unsuccessful rebellions. In 608, the exarch of Carthage revolted and dispatched a fleet under the command of his son, Heraclius, to Constantinople. Along the way, in Egypt, Heraclius joined forces with his cousin Nicetas who was able to capture Cyrenaica and Egypt from Phocas' general Bonosos. Heraclius' fleet continued on to Constantinople where he entered into secret negotiations with one of Phocas' top military leaders, Priscus. Phocas had appointed him

and he was married to Phocas' daughter Domentzia. With the support of Priscus, the patriarch Sergius I, and the faction of the Greens, Heraclius was able to seize the city, have Phocas beheaded and became emperor on October 5, 610 AD.

Heraclius, the son of the exarch of Carthage, Heraclius, and Epiphania was born around the year 575. When he was crowned as emperor in 610 AD, he married Fabia, who then took the name Eudocia. From this marriage, Heraclius had a daughter, Eudocia, and a son Heraclius Constantine, who was proclaimed as co-emperor in 613. Suffering from epilepsy, Fabia died in 612 and Heraclius married his niece Martina in 613. With Martina, Heraclius had nine children of which four died in infancy. Heraclius' marriage to Martina was never received favorably by either the people of Constantinople or the Church.

When Heraclius first came to the throne in 610, the Byzantine Empire was being attacked from numerous sides. In the west, the Avars and Slavs were expanding into the northern Balkans. The Slavs controlled the Danube regions, Thrace, Macedonia, and were soon invading Central Greece and the Peloponnesus. In the east, meanwhile, the Persians under the rule of Chosroes had begun a series of successful attacks on the empire resulting in the loss of Damascus in 613, Jerusalem in 614 (destroying the Church of the Holy Sepulchre and capturing the Holy Cross) and Egypt in 619. Recognizing the difficulty in fighting on two opposing fronts at the same time, Heraclius signed a peace treaty with the Avars in 619, and focused on the eastern half of the empire. In the spring of 622, Heraclius left Constantinople for Asia Minor and began training his troops over the summer, focusing on a more involved role for the Byantine cavalry.

In the autumn, Heraclius' army invaded Armenia and soon won several victories over the Persians. The Avars, in the meantime, became restless and Heraclius was forced to renegotiate the peace treaty with them at a much higher tribute level. Heraclius then returned to the army and for the next several years unsuccessfully attempted to break through the Persian army and into Persia. In August of 626 while Heraclius and his army were in Lazica away from Constantinople, a Persian army attacked the city from the east while an army of Avars, Slavs, and Bulgars attacked from the west and from the sea. On August 10, the Byzantine navy was able to defeat the opposing fleet and then rout the combined Slav and Avar land force. With the defeat of their allies, the Persians retreated to Syria.

In the autumn of 627, Heraclius began to work his way into Persian territory winning an important battle in December at Nineveh during which most of the Persian army was destroyed. As Heraclius continued to move further into Persian territory, Chosroes was deposed and succeeded by his son Kavadh-Siroe whose first act was to secure a treaty with Heraclius. The treaty was very favorable to the Byzantines and returned all the former Byzantine territories to the empire. Within a few short months, Kavadh-Siroe fell ill and died after naming Heraclius as guardian of his son, Chosroes II. For all practical purposes, the Persian Empire no longer existed. In 630 Heraclius traveled to Jerusalem where he returned the Holy Cross to the city among much acclaim.

The defeat of the Persians created a larger problem for the Byzantine empire. The struggle between the Byzantines and the Persians had worn down both sides and the defeat of the Persians allowed the Arabs to quickly absorb what remained of the Persian empire. It also removed the buffer between the Arabs and the Byzantines allowing the two empires to come into contact and conflict. In 634 the Arab armies invaded Syria and defeated Theodore, the emperor's brother, in a string of battles. Heraclius raised a large army that attacked the Arabs near the Yarmuk, a tributary of the Jordan, in the fall of 636. After a successful beginning, the larger Byzantine army was defeated allowing the conquest of Syria. The Byzantine defeat also led to the Arabs quickly taking Mesopotamia, Armenia and eventually Egypt.

While Heraclius enjoyed military success, major changes occurred internally under his rule. Greek replaced Latin as the official language of the empire and Heraclius adopted the Greek title of

in place of the Latin Caesar, Augustus, or Imperator. The recovery of the eastern areas of the Byzantine Empire from the Persians once again raised the problem of religious unity, centering around the understanding of the true nature of Christ. The eastern areas, particularly Armenia, Syria, and Egypt believed in monophysitism, Christ having one nature composed of both divine and human elements. The other areas of the empire followed the orthodox view expressed at the Council of Chalcedon in 451 that decreed Christ had two natures united in one person. In an effort to bridge the gap between the two views and bring them back together, the Patriarch of Constantinople, Sergius, promoted the concept of monoenergism which proposed that the two natures of Christ had one energy. While this was received favorably at first, monoenergism soon had vocal opponents, among them the monk Sophronius who became patriarch of Jerusalem in 634 AD. The opposition to monoenergism led Sergius to propose a new doctrine that of monotheletism, the belief in a single will in Christ. Heraclius supported the new doctrine of Sergius and put it forth in an edict known as the Ekthesis, and posted it in the narthex of Hagia Sophia in 638. This failed to settle the controversy as it was rejected by the Orthodox, the Monophysites, and even the Church of Rome.

During the last years of Heraclius' life, it became evident that a struggle was taking place between Heraclius' son from his first marriage, Heraclius Constantine, and his second wife Martina who was trying to position her son Heraclonas in line for the throne. On the 11th of February 641, Heraclius died and in his will left the empire to both Heraclius Constantine and Heraclonas to rule jointly with Martina as Empress and mother of both.

Roman Emperors Dir The Siblings Of Constantine I

The Stemmata Of The Palaeologi Dynasty