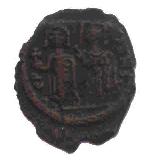 This officer, born in Cappadocian Arabissus, is one of the most important emperors of Byantium. In spite of Justinian's great successes, the empire was still largely threatened in three fronts: in Italy and Spain by the impending loss of the last possessions, by the invasion of the Avars and the Slavs' seizure of territory in the Balkans, and by the Persian wars against the Sassanian Empire in the east. Still in the reign of Tiberius II Constantinus in 581 Mauricius had defeated the Persian Great King Hormizdas IV after a four-year-long campaign. He married Constantia, the emperor's daughter, by whom he had eight children. He took over a bankrupt state, something which forced him to extreme parsimony, but earned him a reputation for avarice among the people and the mercenaries.

In 584, Byzantium lost Cordoba, its last possession in Spain. He secured the remaining western territories by establishing the exarchates of Ravenna and Carthage, where military and civil responsibility were united in one hand. Thereby Mauricius started down the road from the later Roman Empire to the middle-Byzantine arrangement by "themes." In the matter of the ongoing conflict of the imperial church with the so-called "Monophysites" he insisted on retaining the decisions of the Council of Chalcedon. The historians John of Ephesus and Michael the Syrian describe the harsh actions of the emperor against the "Monophysites." In Edessa 400 monks, who refused to denounce "Monophysitism," were executed.  Mauricius was in touch with the Franks and permitted the patriarch John IV, the "Faster," to designate himself ecumenical patriarch, something which led to conflicts with popes Pelagius and Gregory the Great. Gregory in vain begged the emperor not to do so, as such a move amounted to the emperor's non-recognition of the Pope.

In 593 Gregory negotiated a truce with the Lombards, contrary to the emperor's desire, and in 598 this truce was secured with the help of the exarch. The assumption of the title "king" in Italy by the Lombard Autari in 584 made it clear that an organized power, with which Byzantium had to reckon, was developing in Italy. Byzantium was completely helpless to begin with against the invasion of the Avars under their Khan Boyan, who conquered Sirmium in 582. Following the Avars, the Slavs advanced into the Balkan peninsula; in 586 they were at the gates of Thessalonike and in 587 at those of Adrianople, as well as settling in permanently. For the moment the Avars were kept quiet by paying tribute; campaigns that lasted years led to no conclusive result; by 600 they were at the gates of Constantinople, but were nonetheless repulsed by the General, Priscus.

During the Persian-Byzantine war of 572-591, Hormizd II in the winter of 586-87 sent the East-Syrian (Nestorian) Katholikos to Mauricius. He gave the emperor a creed, which he in turn had had checked out by the Patriarch, who characterized it as orthodox and without error, and thus they were able to celebrate the Eucharist together. The emperor was also in correspondance with Sabrisho I. , the katholikos' successor. As a result of a quarrel over the throne in the Sassanian Empire, Maurice in 591 intervened in the circumstances of the East. Chosrau, who had fled to Constantinople, married Mary, who seems to be Mauricius' daughter and in the same year was reestablished on his throne, with Byzantine help. The peace treaty guaranteed Byzantium Armenia and the eastern part of Mesopotamia. The emperor intended to deport the Armenians who wanted to remain "monophysite." From 591 to 611 there were two Katholikoi, one on imperial territory and the other among the Monophysites in Persia. The emperor's success against Persia induced the Georgians to declare their independence. The Georgian katholikos Kyrion decided to reattach the Georgian church again theologically to the Eastern-Roman. The emperor's will in 597 makes clear that he had by no means given up ideas of universal politics: his son Theodosius was to succeed him in the East and his son Tiberius in Rome, which was to remain the second capital.

The campaign of 593 against the Avars took the offensive across the Danube for the first time in a long while. When the emperor, out of parsimony, ordered the troops to winter on the far side of the Danube, the result was a mutiny, which the officer Phocas took advantage of to seize power in Constantinople, with the help of the circus-factions and the Senate. Mauricius fled to the asiatic side of the Bosporus and was murdered, together with his sons, by Phocas' partisans. His widow and their three daughters survived by dint of entering a convent. A senseless mutiny led to the fall of an important ruler, who was followed by a regime of terror which was at the end to lead to a political disaster. The beheaded bodies seem later to have been interred in the cloister of Mamas in Constantinople. Chosrau II used the murder of his father-in-law as an excuse for a war of conquest against Byzantium, which lasted for one year.

The main source for the time of Mauricius is the history of Theophylact Simocatta. The emperor left behind him an extensive military handbook, Strategikon, in twelve books, in which he made use of his military experiences. Plans for the recruitment of a peasant militia, which should replace the mercenary armies, are here discussed. Particularly the eleventh book with its characterization of enemy peoples (Franks, Lombards, Avars, Turks, and Slavs) is of ethnographical interest. The handbook also belongs to legal literature, since it contains a list of military delicts and their appropriate punishments. It cannot be decided whether the emperor himself edited the work or merely initiated it. The emperor was considered a promoter of learning and,  in the Orthodox Church,  is venerated as a saint.

Copyright (C), Whilhelm Baum. This file may be copied on the condition that the entire contents, including the header and this copyright notice, remain intact.

English Translation Copyright (C), Eugene N. Lane. This file may be copied on the condition that the entire contents, including the header and this copyright notice, remain intact.