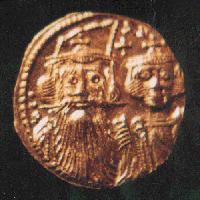 Constans II, son of Heraclius Constantine and Gregoria, was born in Constantinople on November 7, 630. While he was christened Flavius Heraclius, he ruled as Constantine, was also known as Constans and nicknamed "Pogonatas," because of his thick beard. He married Fausta and had three sons: Constantine IV, Heraclius, and Tiberius.

The emperor Heraclonas, because of public pressure after the death of Heraclius Constantine, crowned his nephew Constans as co-emperor in September of 641, at the age of 11. Soon afterwards, Heraclonas was deposed and Constans ruled as sole emperor. This was an unfortunate time to assume control of the Byzantine empire because at just that time the Arabs began to encroach further upon Byzantine territory. In accordance with a treaty negotiated under Heraclonas' reign, the Byzantines evacuated Alexandria in September of 642. The Arab leader cAmr occupied the city and began to advance through North Africa taking Pentapolis and Tripolis in 643. While the Byzantines were able to retake Alexandria in 645, they were only able to hold the city for a year and were soon expelled permanently from the region.

While the Arabs continued to expand across Africa, they also began pushing into Anatolia under the leadership of Mucawiya. The Arabs raided Cappadocia, Phrygia, and Amorium. Mucawiya realized that the Arabs would need a fleet to challenge the Byzantines who up to this time had not really been challenged for control of the Mediterranean. In 649 a small Arab fleet was constructed and used to attack the island of Cyprus. Buoyed by this initial success, the Arabs continued their naval efforts and were rewarded by successful attacks at Rhodes, Cos, and Crete. Recognizing the threat, Constans gathered a fleet and attacked the Muslim navy at Phoenix (modern Finike in Turkey) in 655, but suffered a severe defeat and was forced to flee to Constantinople. Fortunately for Constans civil war between Mucawiya and cAli broke out following the murder of cOthman. Constans was able to negotiate a tenuous treaty with Mucawiya in 659 that lasted until 661/2. This allowed Constans to refocus his attention on the Balkans. In this theater of operations Constans met with more success. In 658 he invaded Sklavinia, an area north of the Danube occupied by Slavs, and successfully defeated numerous tribes. He then forced the conquered tribes to resettle in Asia Minor and probably began recruiting these captive Slavs into his Anatolian forces.

As well as inheriting an uncertain military situation, Constans also faced the problem of the Monothelete controversy that had arisen under Heraclius and continued to cause internal strife in the empire. Monotheletism, which had a strong hold in Syria and Palestine, had been rejected by Africa and the West but remained the official state religious policy. In Africa, this policy's most vocal critic was Maximus the Confessor, an influential religious leader. In response to his criticisms, a number of local synods were convened in the cities of the exarchate of Carthage. The result of the meetings was the condemnation of the current imperial policy as heresy. Encouraged by the backing of North African bishops, Gregory the exarch of Carthage proclaimed himself emperor in 646/7. This rebellion was cut short by the death of Gregory in 648 fighting Arab raiders near Sufetula.

In 648, the patriarch Paul issued the Typos of Constans II in an attempt to bring about a compromise between the Christian factions. The Typos ordered the removal of Heraclius' Ekthesis from the narthex of Hagia Sophia and that upon threat of punishment, there was to be no discussion upon the subject of will or energy of Christ. This failed to achieve its goal. In the following year at the Lateran council held in Rome and dominated by Maximus the Confessor, Pope Martin and the bishops condemned both Ekthesis and Typos and the patriarchs Paul, Pyrrhus, and Sergius. This affront to the power and authority of the emperor forced Constans to move quickly and forcefully. He ordered the exarch of Ravenna, Olympius, to arrest Pope Martin immediately and force the bishops at the council to accept and sign the Typos. Olympius, counting on the support of the Pope and the bishops, instead of following the orders of the emperor, declared himself emperor. This rebellion fell apart after Olympius' death in 652, and by June of 653 the new exarch of Ravenna arrived and fulfilled Olympius' original orders by arresting Martin. Martin was brought before the Senate of Constantinople in December of that year and was found guilty and condemned to death without being allowed to address the subject of the Typos. Constans commuted the sentence to exile in Cherson where Martin eventually died in 656. Maximus the Confessor was also eventually arrested and forced to stand trial. Found guilty, he was mutilated and exiled to the fortress of Schemarion in the Caucasus where he remained until his death in 662.

End of his Reign

In 654 Constans made his son Constantine IV co-emperor and in 659 he did the same for his other two sons, Heraclius and Tiberius. To ensure that there would not be a problem with the dynastic succession, he had his younger brother Theodosius tonsured in 660 and shortly afterwards had him murdered. Theodosius' murder accompanied by Constans' religious problems with Maximus and Martin raised public sentiment against the emperor. This public outcry caused him to leave Constantinople in 661/2 for Italy, even though his campaigns in the western half of the empire might have been due to him following military plans of Maurice and Heraclius. Arriving in Italy, he began a series of campaigns against the Lombards that while successful early, soon failed due to supply problems. He then established his headquarters at Syracuse on the island of Sicily. His goal was to protect Sicily and southern Italy from an Arab naval invasion and to reestablish Byzantine influence in Northern Africa. His need for financial support from the local regions soon made his presence in the area a heavy burden. When he announced his plans to make Sicily his permanent headquarters it was quite unpopular with both the local inhabitants and the populace of Constantinople. On September 15, 668, he was murdered by a cubicularius while bathing. The count of the Opsikion, the Armenian general Mezizios, was acclaimed emperor. The rebellion was put down by the arrival of the exarch Gregory and Mezizios was executed. Constans' body was eventually returned to Constantinople, perhaps by his son Constantine IV, for burial in the Church of the Holy Apostles. With the assassination of Constans II at the age of thirty-seven, Constantine IV became emperor.