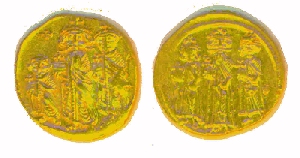 Heraclonas (Heraclius II) was born in Constantinople in 626 to the emperor Heraclius and his second wife Martina. Upon Heraclius' death on February 11, 641, his will declared his sons, Heraclius Constantine (Constantine III) and Heraclonas, as co-emperors and stipulated that the half brothers should have equal status and rights in managing the government. Heraclius Constantine, age 28, was the only son of Heraclius' first marriage to Eudokia (Fabia) while Heraclonas, age 15, was the eldest son of Martina, Heraclius' niece and second wife. Heraclius' will further stated that both sons should regard Martina as their mother and Empress. When Martina presented the will to the Senate, it accepted the two sons as the new co-emperors but rejected the idea that Martina should play a role in the government.

Even though Heraclonas was co-emperor, his young age and inexperience allowed Martina to control him totally and thus rule the state through Heraclonas. She constantly opposed the policies of Heraclius Constantine, and this opposition led to the development of two factions within the government. While Heraclius Constantine possessed the more powerful following, the worsening economic situation in Constantinople and his failure to prevent the Arabs from seizing Egypt weakened him politically. His sudden death of tuberculosis (even though one source reported that Martina poisoned him) in late April or early May (April 20/24 or May 26), less than four months after assuming power, left Heraclonas as sole ruler. Martina, still working through Heraclonas, began immediately to exile the prominent supporters of Heraclius Constantine.

Shortly after Heraclius Constantine's death, the Patriarch Pyrrhos, one of Martina's primary advisors, became more influential and was able to revive the policy of Monotheletism. This revival led to Kyros, a monothelete, regaining the see of Alexandria. His jurisdiction included both ecclesiastical and secular control. Once Kyros arrived and assumed command over the see, the government immediately instructed him to open negotiations with the invading Arabs since it was believed that nothing could be done to stop the Arabs in Egypt.

The rumors that Martina had brought about Heraclius Constantine's death by poison and the new Monothelete policies caused the people and the Senate to turn against Heraclonas and Martina. The Armenian Valentine Arsacidus (Arsakuni), a former supporter of Heraclius Constantine, with the assistance of the troops stationed in Asia Minor, marched to Chalcedon. This show of strength against him forced Heraclonas to name Heraclius Constantine's young son, the eleven year old Constans II, as co-emperor in September of 641. This, however, failed to ease the discontent against Heraclonas, and by the end of the month the Senate deposed him. After his nose was slit and Martina's tongue cut out, Heraclonas and Martina were exiled to the island of Rhodes. This is believed to be the first time that the oriental practice of mutilation was practiced by the Byzantines. It was used to signify that the mutilated person was no longer able to hold political power. With Heraclonas' deposition, Constans II became sole emperor.